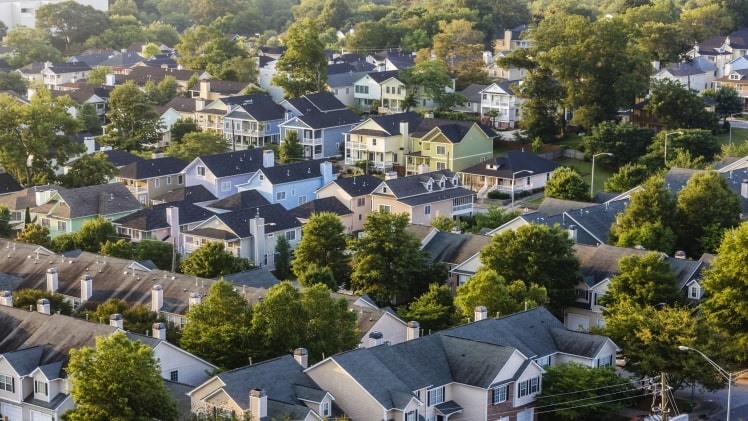 Only one out of ten homes are being purchased within 14 days of it going on the market for sale, as told by Chesham estate agents. This scenario is surprisingly not isolated to the estate market in and near Chesham but in most parts of the UK. The price of houses in the UK has reached a record high for the fifth time in 2022. But there might be a silver lining after all as the pace of growth is showing signs of slowing down in the second half of this year.

In May, the price of properties reached £368,614 after a fifth consecutive rise and reached 9.3% last year. But this is the smallest increase since January (0.3%).

According to data, the cost of living crisis continues to overwhelm people along with rising rates of interest. So the pace of increase is gradually slowing down but the market is yet to crash, making it difficult for first-time home buyers and those who are trying to buy a property.

Tim Bannister, the director of Rightmove’s Property science says that the first half of the year showed a strong rise and it is most likely that the crunch in house affordability will leave an impact on the market’s behaviour in the upcoming months.  The rise in the interest rates is also anticipated during that period. With the greater number of choices becoming available in the market for those who want to purchase property, the expectation of seasonal variations also exists which means there could be a month-on-month fall in the price in the second half of 2022.

Will there be an increase in the sale of houses due to a price drop?

As per the experts from Rightmove, the per annum price growth will be decreased to almost 5% while it is currently at a staggering high of 9.7%. But this does not automatically guarantee a drop in the prices anytime soon.

The housing market is much busier in comparison to the pre-pandemic period. The number of sellers willing to reduce their asking price and the time taken to complete the sale of a house has increased. But there are subtle signs of the market slowing down. The yearly house price inflation has come down from March’s 9% to 8.4% in April. This number is expected to fall to 3% by the time 2022 comes to an end.

But there is also a separate forecast and analysis conducted by the EY Item Club which says the prices of houses with continue to grow and a market crash or signs of a slowdown are most unlikely.

Reason for a hike in the price of houses

The growth in the price of houses mostly began during the surge of the pandemic and some reasons include the stamp duty holiday as well as a new mortgage guarantee. People have been racing a lot lately for space as there is an increase in the demand for bigger properties as more and more people are adapting themselves to work from home or the hybrid models. As per reports from Nationwide, the surge in demand for a detached home has increased by almost £68,000 as the pandemic began which shows a rise of 22%. People who are working from home have been wanting bigger space to live in.

To add to this, the demand for homes is exceeding the number of homes that are on sale, making the buyer’s demand more than double which is 133%.

However, the impact of rising inflation, cost of energy and increase in the rate of interest could influence the market and make the act of buying a house more expensive. The Bank of England has also been revising its rate of interest and it has increased five times since December which could eventually have an impact on the housing market.

There is a huge shortage in the availability of properties as one of the key consequences of people trying to make the most out of the stamp duty holiday. This is one of the principal reasons why the asking prices have skyrocketed.

However, the number of property listings is also beginning to rise and there has been an increase of almost 19.2% between January and April 2022.

The increase in supply is more noteworthy in the rural areas in comparison to the urban market as the growth noted in new properties on sale in Wales escalated by almost a third during this period. On the other hand, this increase was only 5.7% which is the smallest rise when it comes to a place like London.

The financial struggle for first-time buyers

When it comes to first-time buyers, arranging the deposit is the biggest hurdle although there has been an increase of 93.2% among first-time home buyers in the last ten years. The current deposit is 112% more than what it was a decade ago and this is even before buyers start to pay off their mortgages.

Mortgages in themselves are just as unaffordable as it was during the financial crash of 2008.

Furthermore, Rightmove has also warned of an impending “conveyancing logjam” which means all those who are planning to sell their properties have to come to the market in the few upcoming weeks for then to have their best shot at moving ahead of Christmas.

The housing market in the UK is far away from plunging into a crash. But experts claim to have noted certain signs of a decrease in the rate of increase in price and affordability in general. The number of houses available for sale has increased to a huge extent in the rural areas of the UK in comparison to urban dwellings. Overall, UK’s housing market is one of the least affordable ones in the world.

Why should you consider replacing an entry door?

Décor Ideas for The Dining Room to Enhance its Appearance